The bank’s service area includes portions of the Towns of Belwood, Boiling Springs, Columbus, Forest City, Lake Lure, Rutherfordton, and Spindale, the Cities of Kings Mountain and Shelby, and the Counties of Buncombe, Cleveland, Gaston, Henderson, Lincoln, McDowell, Polk, and Rutherford. No other mitigation banks serve this area.

Box Creek Wilderness Area (BCWA) is approximately 6,800 acres in total.  It is located within the South Mountain region, which includes South Mountains State Park and Gameland. The Bank Site includes 5,040 acres of this area, as well as approximately 45 miles of pristine cool water streams.  Buffer widths on the streams range from 200 feet to 500 feet, at least six times the minimum mandatory buffer width for mitigation.

The diversity of rare species and rare natural communities appears to be more concentrated within BCWA than any other area in the South Mountains, and is comparable in its regional ecological significance to flagship sites like Roan Mountain, Linville Gorge, Chimney Rock, and others.

Approximately 2/3 of the Bank Site ranks as a 7-10 in conservation value (“high”) by NC DENR’s Biodiversity and Wildlife Habitat Assessment tool, and the remaining 1/3 of the site ranks as a 10, the highest possible score.

The project is truly a watershed approach with a conservation easement that encompasses approximately 2,700 acres of land that protects streams from the headwaters to the main channels. Protecting these high quality headwater systems is essential to preserving a healthy freshwater ecosystem and protecting the Broad River Basin water resources. 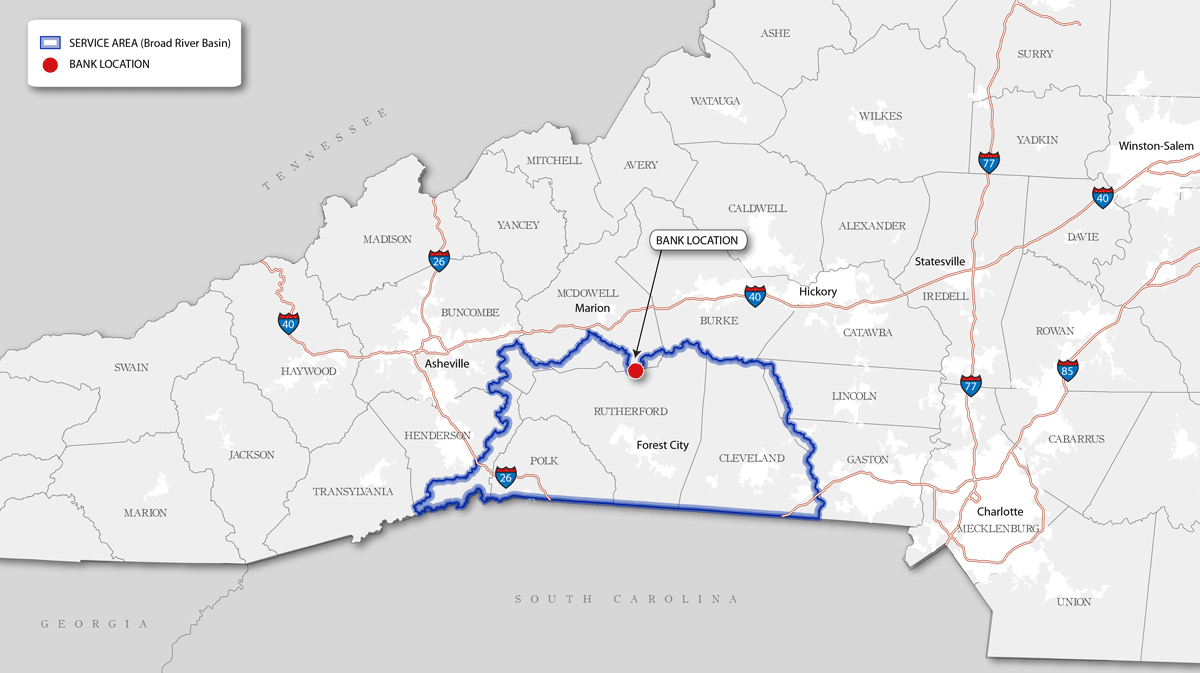 “Box Creek Wilderness is a critical, rare, unusual, and unexpected natural areas in the western foothills. Ecologists documented over 130 NC Rare and Watch List plant and wildlife species, several new-to-science wildlife and plant species include 3 moths and a new spiderwort species. Three new-to-science natural communities were documented, one of which has vast hillcane (native bamboo) ground layer, and four natural communities never documented east of Murphy or Brevard. BCW is houses numerous endemic species known only in the South Mountains, and conversely numerous “disjunct” plant species typical of midwestern prairies, the NC Sandhills, Coastal Plain habitats. It ranks in the top 1% of Natural Heritage Areas in NC and holds the highest possible rank for a property (R1C1).”

— Kevin Caldwell, Mountains-to-Sea Ecological
“Box Creek Wilderness is a treasure trove of biodiversity and one of the highest quality and most significant natural areas in the state. Working on this property was a real treat. The diversity and rarity of natural features was unexpected and every day was full of surprises. Plus it’s everything a conservation project should be; it’s large, it’s wild, it’s connected, and it’s full of Globally rare species and natural communities, some discovered for the first time on this property. It’s the type of project a conservation biologists dreams about. I am honored to have part of it.”